James Eckler, M.Arch, associate professor and director of Marywood University Architecture Program was recently awarded the Council for Advancement and Support of Education (CASE) Professor of the Year Award at the University. This award recognizes extraordinary dedication to undergraduate teaching as demonstrated by the impact on and involvement with undergraduate students, scholarly approach to teaching and learning, and contributions to undergraduate education.

Professor Eckler’s teaching and scholarship focuses on introductory design education, its content and structure, as well as the particular educational challenges faced by novice learners in the areas of architectural design. Along with his outstanding teaching, he is also the author of the textbook, Language of Space and Form, and co-author of Introduction to Architecture, each published by Wiley Publishing, a prominent press in architectural textbooks. 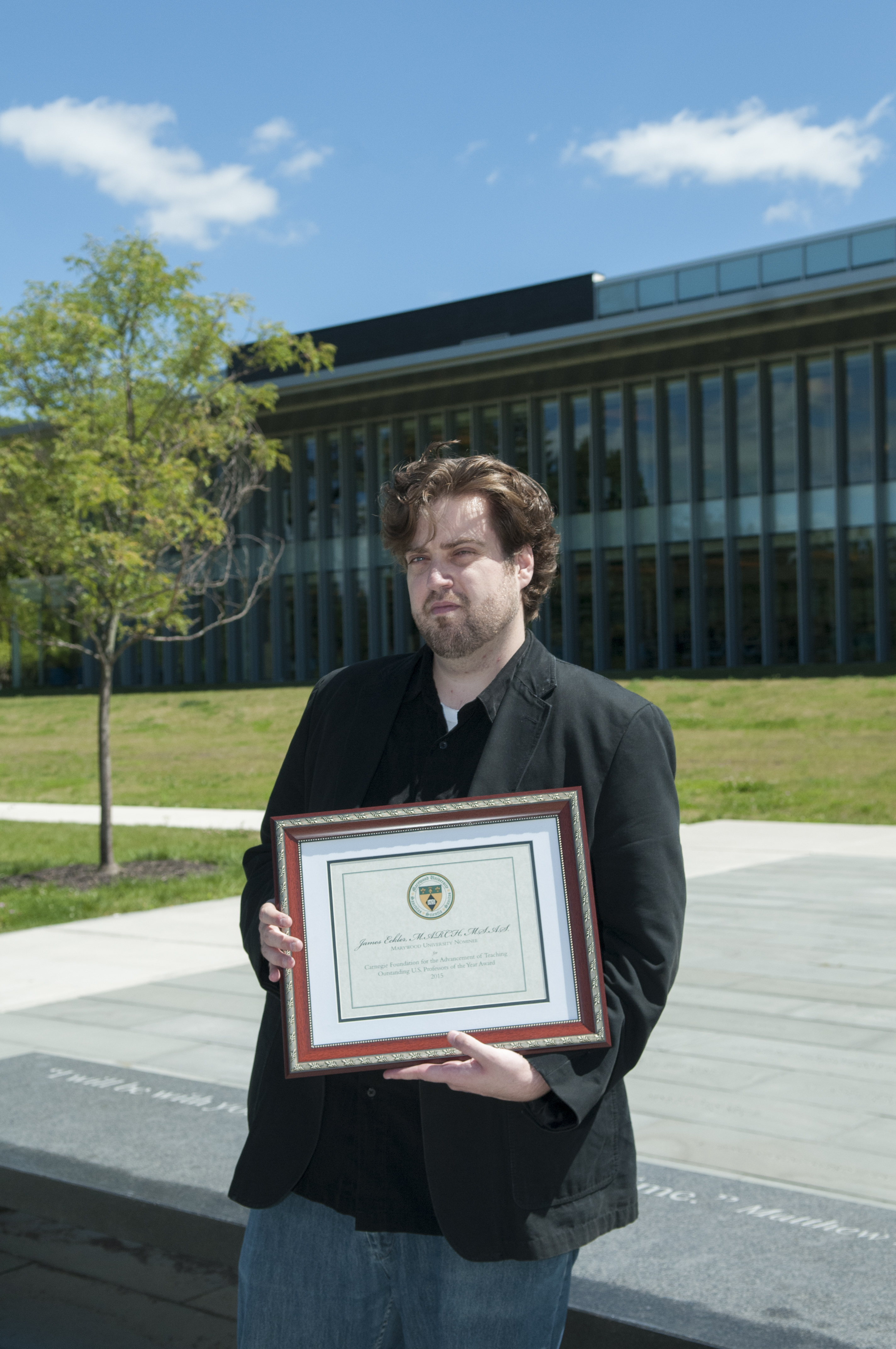 James Sullivan, dean of the School of Architecture at Marywood, said, “In the six years that Mr. Eckler has been at our School, he has played a formative role in the development of our curriculum, structure, content of numerous courses, and the overall quality and character of our learning culture.”

Mr. Eckler earned his bachelor of design, master of architecture, and master of science in architectural studies: pedagogy degrees from the University of Florida School of Architecture. His interests and research follow two paths: teaching methodology and urbanism.  The other facet of Mr. Eckler’s research is in architecture’s potential to foster community through social interactions of the urban environment. His interests in urbanism have led to various presentations and awards and have had a significant impact on the development of his studio teaching philosophy.

Lindsey Wotanis, Ph.D., associate professor in the communication arts department at Marywood University, was recently awarded the Distinguished Service Award at the University. Dr. Wotanis serves as the faculty adviser for The Wood Wood, Marywood University’s student-run newspaper. She founded and advises the Marywood Society of College Journalists and also serves as a faculty adviser and committee member. Additionally, Dr. Wotanis works on recruitment and publicity efforts with the University.

Collier Parker, M.F.A., dean of the Insalaco College of Creative and Performing Arts, said, “Dr. Wotanis embodies the Marywood core values of Catholic Identity, Respect, Empowerment, Service, and Excellence through her work with students, her service and total commitment to the department and the University, and her profession. This can be seen in the way that she reflects on her teaching and interaction with students, in the way that she constantly works to improve her courses, by her dedication to the improvement of The Wood Word and the efforts that she makes toward her students’ success.”

Dr. Wotanis has overseen the growth in The Wood Word staff from ten students five years ago to nearly thirty student staff members presently. Under her guidance, the paper transitioned from a broadsheet to a tabloid with spot color, to print and online, to a completely online publication with daily reporting and updates. The paper has won numerous awards, including a first place in colleges/universities with more than 250 enrollment and an “Outstanding Editorial” in 2014 from the American Scholastic Press Association Scholastic Newspaper awards. The paper won multiple Society for Collegiate Journalist awards, placing first, second, and third in 2014 and 2015. 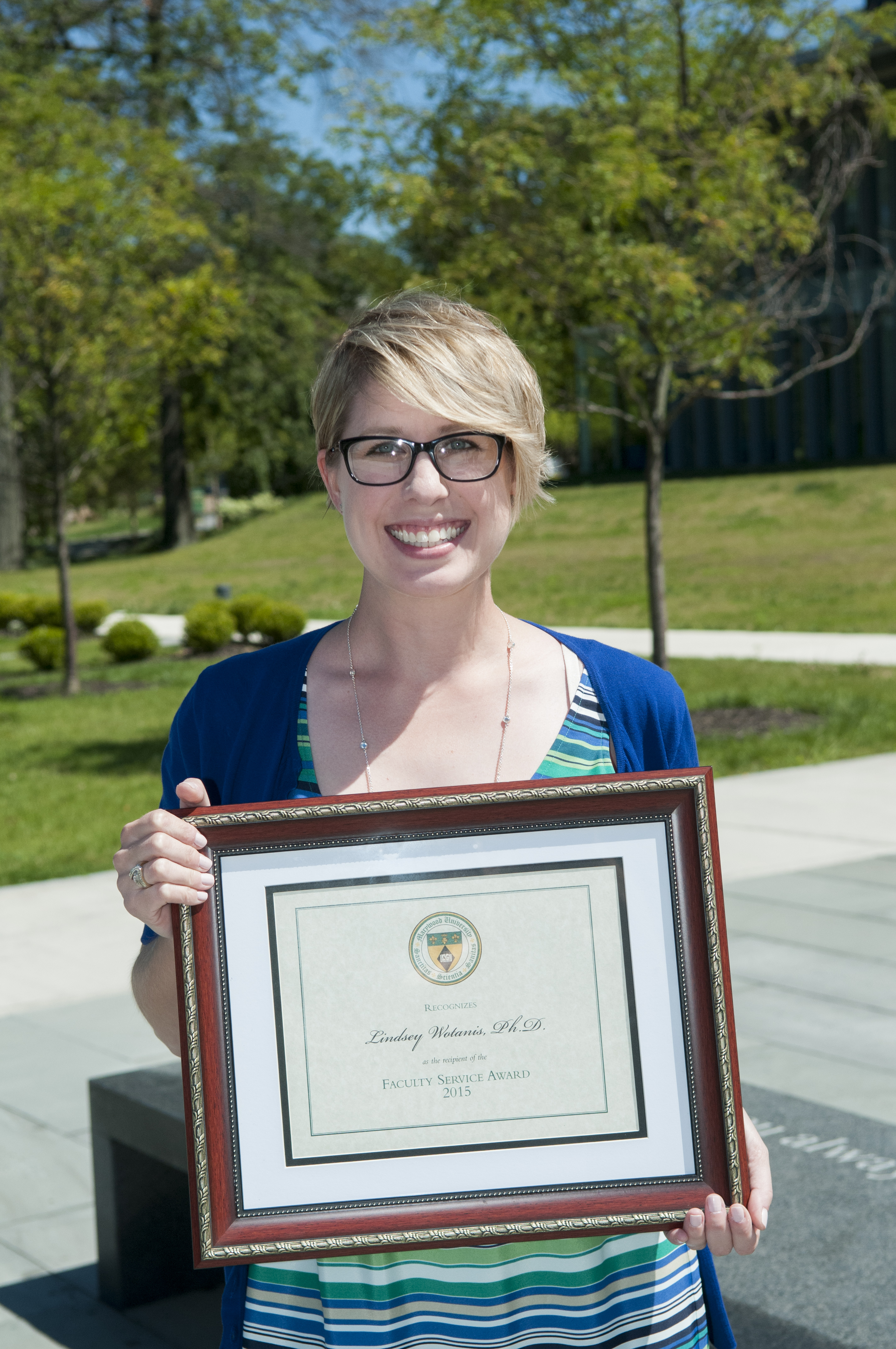 The Marywood Chapter of the Society for Collegiate Journalists was established by Dr. Wotanis in 2011. She serves as the chapter adviser and oversees the annual induction ceremonies and a number of chapter activities, including an on-campus National News Engagement Day and chapter fundraisers. She has also had a significant impact on the communication arts department’s recruitment efforts while serving as the department recruitment coordinator. She helped start and continues to oversee the department’s student run recruitment blog, “Frame Your Future,” and has marketed the program through various social media outlets.

Dr. Wotanis serves on a number of University and community committees, including: the President’s Enrollment Task Force Committee, the Policy Committee, the Technology Committee, the Commencement and Convocation Speakers Committee, and Middle States Standards Committee. Additionally, she served as vice president of the National Board of the Society for Collegiate Journalists in 2014. Dr. Wotanis is an active member of the Holy Cross Parish Church, Olyphant, Pa., where she serves as a sixth grade catechist and coordinator of the church’s vacation bible school, and she served on the Board of Directors of the Valley Community Library from 2013-14.

Sophie Till, M.M, clinical assistant professor of violin/viola and director of the String Project in Marywood University music, theatre, and dance department, was recently awarded the University’s Distinction in Discipline award.

Collier Parker, M.F.A., dean of the Insalaco College of Creative and Performing Arts said, “Ms. Till is a highly respected violin performer and violin teacher. She has performed and taught throughout the world, from cities in the U.S., to Glasgow, to Australia, and Singapore. Without question, Ms. Till has had a successful and distinguished career as a performer and teacher.”

Immersing herself in the work of translating the Taubman/Golandsky piano technique to the violin, Ms. Till has lectured and held master classes on her findings in England, Scotland, Australia, throughout the U.S., and at Marywood. The Taubman/Golandsky piano technique is a method that helps players reduce the risk of injury and assists players in recovery from repetitive motion. She has been able to translate the method to the violin and other string instruments and has gained a worldwide following for her pioneering work.

Ms. Till was an invited presenter at the Australia National String Teacher’s Conference in Sydney, Australia, in 2015. She was the keynote speaker at the international conference and presented and conducted workshops as well. Ms. Till worked with string teachers at the Griffith Conservatorium, Brisbane, and Music Teacher’s Association, Queensland, Brisbane, Australia. Participants at these conferences have praised her work and expressed renewed confidence in their own ability to play their instruments injury free. 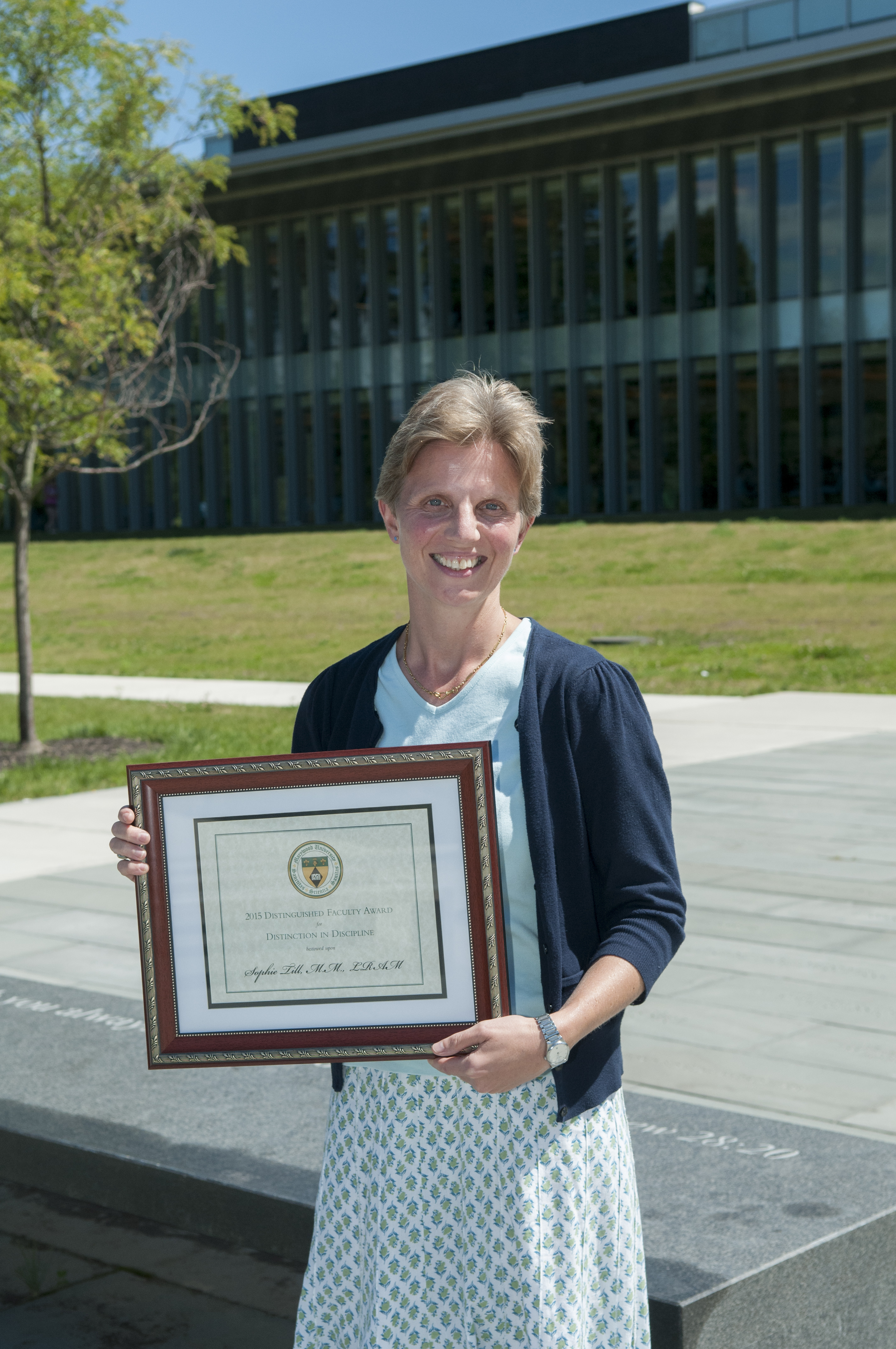 As director of the String Project, she works with string players aged four through eighteen years old. She teaches applied lessons to Marywood University violin and viola students and acknowledges that her work across the globe has a major impact on her teaching at Marywood. In 2014, Ms. Till formed the Marywood String Ensemble to help give string students more exposure playing and experience with string literature. The students benefit from her vast knowledge and expertise, as she is able to translate her work with professional string players to help her students at Marywood solve technical problems and learn better techniques.